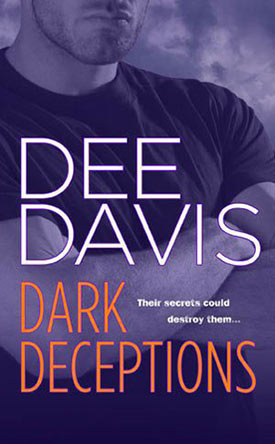 TORN BETWEEN DUTY AND DESIRE

Covert operations expert Nash Brennon has spent the last eight years trying to forget Annie Gallagher, his former field partner and the only woman he ever loved. Annie betrayed him when he needed her most, then vanished without a trace. Now suddenly she’s back in the game—this time as a suspected traitor and threat to national security.

Annie’s son has been kidnapped by political terrorists. The price for his life? Assassinate a UN ambassador. Then Nash finds her, and immediately, the smoldering passion between Annie and the man she swore she’d never contact again almost blazes out of control. But can Nash trust her? The stakes couldn’t be higher: their enemy’s endgame is personal, and one false move could cost them their lives.

“Emotionally complex and beautifully written, DARK DECEPTIONS is an exciting story of love and betrayal, trust and forgiveness. Dee Davis’s strong narrative makes this tale another page turning, white knuckle, fantastic romantic thriller. Loyal fans of Ms. Davis welcome her back to this genre and to this outstanding opening to a new trilogy.”

“Action, suspense, intrigue, betrayal and love at its best! Davis has a superior knack for weaving a tight plot. Every relevant facet is explored and revealed in perfect synchronicity. The end result is a near-perfect romantic suspense!”

“So do you think we’re ever going to feel like a normal couple?”  Annie asked as they stumbled back into their hotel room, Nash’s hands cupping her breasts, his breath hot against her cheek.

“Trust me, angel, normal is overrated.”  He pushed her back against the wall, his thumbs rubbing heated circles through the soft silk of her halter top.   “And anyway I kind of like what we’ve got.”

“Right,” she sighed, shivering as he kissed her neck.  “Sex on the run.”

“Well, it’s not like we have a lot of free time.”  His mouth slanted over hers, his tongue sending fire lacing through her belly.  It was always like this.   Combustible.  Their desire heightened by the possibility that each time could be the last.

“Maybe we should adjourn to the bedroom?”  She nodded toward the doorway of the suite, and then gasped as he pushed her skirt up around her thighs.

“What’s wrong with right here.  Right now?”  He teased her with his fingers, the friction  of satin against skin threatening instant explosion.   She lifted her hips, but he pulled back, his slow smile taunting her.   “Unless of course you’ve changed your mind?”

“Not on your life.”   She reached up to unbutton his shirt, her fingers tracing the scars that laced his chest.  Twisted mementos of their life together.   “Tell me what you want,” she whispered, her breathing labored.

“So take me,” she taunted, anticipation coiling inside her, hot and heavy.  Sometimes she thought maybe she wanted something more.   Something that resembled normalcy—commitment.  But not now.  Not in this moment.  Right now all she wanted was Nash.

For a moment their passion stretched taut between them and then, trembling with the sheer power of the feelings he evoked, she arched her back, welcoming his hands and mouth as he crushed her against him.  This was what she craved.  What she wanted.  As long as she had Nash, she could endure anything.

“The bed…I can’t…please.”  She gasped the words as they stumbled backwards, the need so intense now she thought she might die of it.

His dark eyes reflecting her passion, Nash swung her up into his arms and in two strides they were through the door, and on the bed, the cool cotton sheets a counterpoint to the heat that pulsed between them.

Annie pressed against him, her eyes riveted for a moment on the mirror across from the bed and the image of their interlocked bodies moving in tandem.   Two shattered souls desperately seeking release.   She sighed, and then froze as something else in the mirror moved.

A shadow detached itself from the wall, and Annie dug her nails into Nash’s back, instinct and training overriding passion in an instant.  Nash’s muscles tightened in response and moving with a precision gained from years of working together, they sprang apart, a bullet smashing into the headboard between them.   Annie rolled to the floor, reaching for the gun she kept strapped to her thigh.  In her ardent haste she hadn’t had time to remove her weapon.

But Nash had.  He’d thrown it on the table as he’d carried her to bed.

Damn it all to hell.

From her vantage point beside the bed, she couldn’t see Nash or their assailant.  Which meant she needed to move.  Popping up to fire a round in the direction of the shadow, she rolled out from the bed, diving for cover behind a chair as a bullet shattered a lamp just above her head.

Nash was cornered between the bed and the wall, the bed giving protection, at least for the moment, but the gunman had the advantage.  He stood between them and the door, with a large wardrobe to his left blocking her from taking a clear shot.

“Well isn’t this a pickle,” their assailant said, his accent a smooth blend of American and French.  She should have known.  Adrian Benoit.  They’d only just been in his apartment.  Looks like he was returning the favor.

“Seems we’ve got ourselves a Mexican stand off,” he drawled.

“Except that none of us are Mexican,” Nash quipped.   She could see him now reflected in the mirror.  And when he smiled, she realized he could see her as well.  Which meant he had a plan.

“So what, you want us to come out with our hands up?” Nash queried, nodding almost imperceptibly toward his gun lying on the table about five feet in front of her.

“It would certainly make things easier.  But what I really want are the files you stole from my computer.”

“And then you’ll let us go?  Right.  And I’ve got some swampland…”  Nash’s laugh was harsh as he tipped his head slightly, signaling for her to stand ready.  Annie nodded, already shifting her position.

“Well now, there wouldn’t be any fun in letting you live, would there?” Benoit responded, anger clouding his voice.

Annie drew a breath, rolled out from behind the chair, fired once and then dove for the table, her hand closing around the butt of Nash’s gun.  “Two o’clock,” she yelled, as she chunked the weapon overhand toward Nash, still shooting in Benoit’s direction in an attempt to provide some modicum of cover.   Her ploy worked, Benoit turning to return fire as Nash emerged from behind the bed in a flying leap, intercepting the gun as it tumbled through the air.

Two seconds later and it was over.  Benoit lay dead in a pool of his own blood.

“Are you all right?” Nash asked, pushing to his feet.

“I’m fine,” she said as they met halfway, Nash’s arms closing around her.

“You sure?”  He ran his hands down her now trembling body, double checking to ascertain if she’d told him the truth.

“Really.  He didn’t hurt me.  You were the one without the gun.”

“Evened the odds.”  He shrugged, his voice buoyed by adrenaline, his smile edged with a ruthlessness that had kept him alive more times than she cared to remember.  “So where were we?”

“I think that ship has sailed,” she said, her gaze falling on the body.

“I suppose you’re right,” Nash said, brushing a strand of hair from her face.  “We’ve got to get out of here before someone starts asking questions.   Benoit was using a silencer.  But we weren’t.”

“I’ll start wiping things down.”  She pulled away, and reached for a pair of gloves, falling effortlessly into a pattern they’d perfected over countless operations.

“So what was it you said earlier?”  Nash called from across the room where he was packing their gear, his tone teasing, the fact that they’d just survived death—again—already an afterthought.   “Something about wondering if we’d ever be a normal couple?”

Despite the gravity of the situation, Annie smiled.  She loved this man.  With every ounce of her being.  And the cold hard truth was that she wouldn’t change a single thing about their life.  “I think,” she said, reaching down to retrieve Benoit’s gun, “that I just answered my own question.”

Excerpt from DARK DECEPTIONS by Dee Davis, Copyright ©2010 by Dee Davis. All rights reserved. Reprint only with permission from author. Please contact dee@deedavis.com. 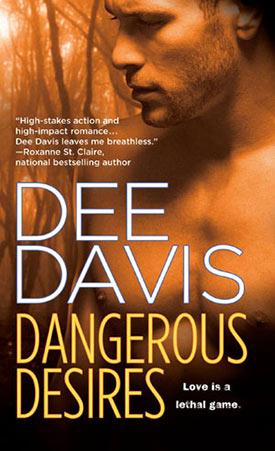 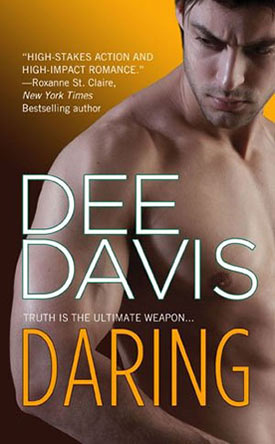 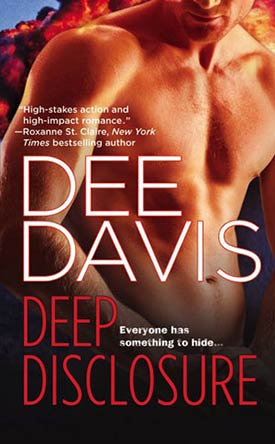 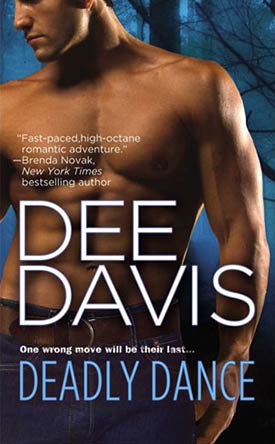 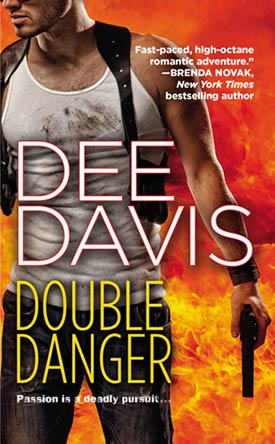 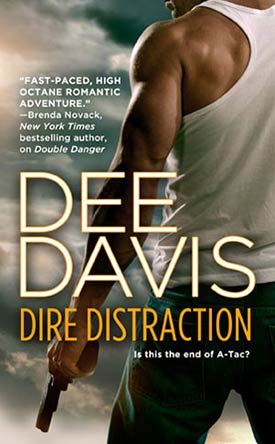