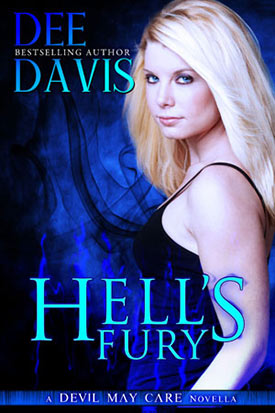 They were the baddest of the bad, the illegitimate sons and daughters of  Satan, who had managed to make love, raise hell, and milk life in a manner worthy of their heritage. Until the day the devil himself needs to name his heir apparent.  So who will the next ruler of Sin City be?

Jezebel Wyatt is the second of the Devil’s daughters.  An Immortal with a gift for acquiring information, she has survived the centuries using her unique talent to obtain and sell crucial secrets to whomever offers the greatest prize.  For Jessie, it’s only a game.  Winner take everything.  So when her father appears with the deal of all deals—steal the Protector of Armageddon—she accepts.   But she knows she needs help, and the best alternative is also the worst—her ex-lover—David Bishop.

International operative David Bishop is obsessed with finding the Protector, and through it the man who killed his brother. The only time he’s ever been distracted from his quest was the time he spent in Jessie Wyatt’s bed.  An ice cold siren with a red hot core, David isn’t sure he can trust her—even though she’s offering a partnership that would give them both what they desire.

With Jessie’s ability to acquire information, and David’s uncanny knack for getting into and out of tight situations, they seem to have everything they need.  But as the forces of evil mount, Jessie and David must face their past as well as their darkest demons. And together they’ll learn that only by relinquishing everything can they hope to fulfill the promise of love.

"These superb paranormal romances…prove that love is stronger than even Lucifer. Nephews and nieces next?"

"Jessie and David have a lot of chemistry and unfinished business between them… [Davis’ story] is a very exciting tale with a fast moving plot."

"A sensual tale of passion, love and longing. Maybe someday Satan will get his retirement, but lets hope it's not for a few more books."

Jessie cursed her own vulnerability. If time had taught her anything at all, it was that nothing was worth opening her heart. And even if there were something out there – it wasn’t David Bishop. She’d already been on that ride and the thrill was overrated. The cost too damn high. She’d spent the last couple of years trying to exorcise him from her system. Apparently without any success at all.

She told herself that it was just proximity. Sensory memory or something equally inane. Pheromones always seemed to have a mind of their own. But it was hard to ignore the real fear she’d felt when she’d found him cornered in Lewisham.

In all truth, it was a new and powerful emotion. An immortal didn’t really experience a whole lot of fear – and considering she’d been hung, poisoned, and shot to death on three separate occasions – she was more immune to the feeling than most. Basically, from her point of view, death was a less than frightening experience.

Except when it was happening to David.

Even with Henri, the only other man who’d managed to penetrate her shell, she’d never felt such raw, physical anguish. And she’d watched him die. At the time she’d mourned Henri’s loss, her pain real, but it had been nothing like the stark desperation she’d felt upon walking in on David at Iverson’s.

She glanced over at him, sitting in the plane seat next to her. His eyes were closed, his breathing even. Obviously he’d taken the adventure in stride. In fact, he’d managed to act as if nothing of importance had happened at all.

Of course there was the little fact that Iverson had quite possibly known the location of the Protector. Her father wouldn’t be to happy when he discovered she’d saved a mortal and in doing so had lost the key to the quest. But then she didn’t have to tell her father.

“Having a little bit of trouble, are you?” The monitor embedded in the seatback sprang to life, her father’s head sort of bobbing in place against the dark blue background.

“What are you doing here?” Jessie whispered, shooting a sideways glance at David and the passengers across the way. Thank God for first class – she’d learned along time ago that people with money tend to tune out everything around them. The epitome of turning a blind eye.

“Just checking on your progress.” Her father’s smile was jaunty, but his black eyes were not amused. “I see you’ve picked up the garbage.” For reasons Jessie had never really understood, her father had reacted almost as violently to her liaison with David Bishop as she had. Practically ordering her to stop seeing the man.

But Jessie had never listened to anyone. Particularly her father. And of course the irony was, he’d been absolutely right.

“Blast and damn, girl. You don’t need anyone’s help,” her father thundered. Fortunately, no one but her could hear him. “Especially not a mortal. What do they know?”

“Well, this one is an expert on the Protector of Armageddon, remember? And if you want me to find the damn thing, I’m going to need his help.”

“I assumed you’d simply use your gift – after all that’s what gives you the upper hand in finding things, am I right?” His smile this time was genuine. Her father liked it when she played by his rules.

“I tried. More than once as a matter of fact.” Since she was a tiny girl, Jessie had been able to see things, visualize who exactly held the information she needed. Sometimes it was quick and to the point, sometimes it was so vague it took her weeks to work it out, but always it was ultimately on target.

Except with the Protector. She’d tried to find it years ago – for David. And she’d been trying now – for her father. With absolutely no success at all – except that’d she’d managed to locate David, and stop him from being killed.

“I’m blocked. Or the box is protected in some way. Long and short of it is, that if I’m going to find it, I’m going to need help, and David’s been hunting the thing for years. He’s my best shot.”

“Well, I’d think the very fact that he hasn’t found it, would mean just the opposite, but who am to question your choices. I’ll just believe in your resourcefulness, and remind you how much is hanging in the balance here, for you – and for me.” Leave it to her father to make it all about him.

“I’ll get the box, Daddy. I promise. But no more popping in to see how I’m doing. You owe me that much.”

For a moment, her father’s frown seemed to reach out from the monitor, his eyes shooting flames, but then with a sigh, he capitulated. “Fine. Have it your way.”

It was an old battle. “I don’t need your help. I’m perfectly capable of taking care of myself. I’d think the last few centuries would have more than proved the fact. ”

“And the moon is made of green cheese.” She started to laugh, but swallowed it, worried that David would wake to find her father ensconced in the little monitor. “Look, Daddy, I learned my lesson. Relationships can’t work. Not for someone like me. So I’ll handle this – without your interference.”

She waited as her father digested the information.

“I’ll have your word.” He opened his mouth to argue, but she shook her head. “If you can’t give me that, then I won’t even try to find the box. You can take your request to Lola.” She knew he couldn’t, her little sister was capable of a lot. Wrecking havoc among men being chief of the list. But she wouldn’t be able to find the Protector.

“I gave you the quest. And I guess I’ll just have to trust that you know how best to find the box.”

It wasn’t a glowing endorsement, but considering this was the devil, she’d take it.

Excerpt from HELL'S FURY by Dee Davis, Copyright ©2013 by Dee Davis. All rights reserved. Reprint only with permission from author. Please contact  dee@deedavis.com .

Books in the Devil May Care Series 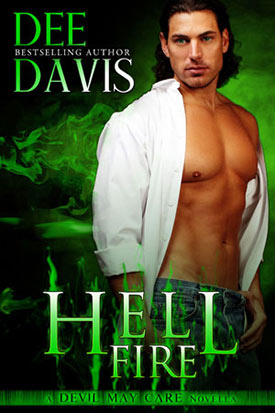 "No matter the genre, Dee Davis’s writing is superb."