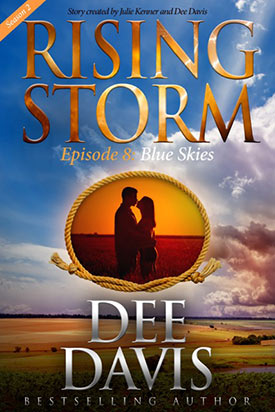 Welcome to Storm, Texas, where passion runs hot, desire runs deep, and secrets have the power to destroy… Get ready. The storm is coming.

As Hannah Grossman grapples with the very real possibility that she is dating one Johnson brother while secretly in love with another, the entire town prepares for Founders Day. The building tempest threatens not just Hannah’s relationship with Tucker and Tate, but everyone in Storm as dire revelations threaten to tear the town apart.

Reading like an on-going drama in the tradition of classic day and night-time soap operas like Dallas, Dynasty, and All My Children, Rising Storm is full of scandal, deceit, romance, passion, and secrets.

With 1001 Dark Nights as the “producer,” Julie Kenner and Dee Davis use a television model with each episode building on the last to create a storyline that fulfills the promise of a drama-filled soap opera. Joining Kenner and Davis in the “writer’s room” is an incredible group of New York Times bestselling authors including Lexi Blake, Elisabeth Naughton, Jennifer Probst, Larissa Ione, Rebecca Zanetti and Lisa Mondello who have brought their vision of Storm to life.

Get ready, the Storm is Coming…

For more on Rising Storm check out http://risingstormbooks.com.

"The drama in this installment is at an all-time high and the pacing of this story was really good, so kuddos to Dee Davis!"

~ Under the Covers Book Blog

Celeste Salt sucked in a fortifying breath and looked at herself in the mirror.  Her hair was passable, her make-up concealing the worst of the dark circles beneath her eyes.   Unfortunately, there was nothing to be done for the gauntness in her cheeks or the deep lines now etched around her mouth and eyes.

Grief was an insidious thing.  Digging in and holding you down, even when you knew in your heart that you needed push forward. Celeste had always been a fighter.  It was something her children had admired.  And then somewhere along the way she’d lost her way, Jacob’s death seemingly sealing her fate.

But no more.  There was still life ahead of her.  Maybe it wouldn’t be the stellar ride into the sunset she and Travis had planned all those years ago.  But that didn’t mean there wasn’t something left to be salvaged.  To be lived.

Her daughter Lacey was right.  It was time to move on.  Step by cautious step.  She forced a smile, the face in the mirror shifting with the motion, looking almost pretty.  Almost.  Squaring her shoulders Celeste walked from the bathroom into the bedroom.  And after pulling a manila envelope from deep inside her lingerie drawer, she made her way downstairs.

It was early.  Most of the house’s residents still sleeping.  It was comforting somehow to know that her daughter was safe and sound in her room.  And that her sister and her children also slept nearby.  Payton had always been her rock.  And now it was time to return the favor.  But first up she needed to clean house.  If she was going to survive, she had to get rid of the garbage.  No matter how much it hurt.

“I wasn’t expecting you up this morning.”  Her husband looked up from the kitchen table where he was reading the paper.  Some things at least were predictable.  Travis never went anywhere without a cup of coffee.  Once, long ago, in what seemed now like another life, she’d been up with the sun, making sure his coffee was hot and waiting when he’d come downstairs fresh from a shower.

But those days were gone.

And finally…finally she understood that nothing was going to bring them back.

“I wanted to talk to you.”  She poured herself a cup of coffee, and sat across from him at the table, laying the manila envelope on the tabletop.

Travis frowned.  “Is something wrong?”  He paused, the frown deepening.  “I mean, something more than usual.”

“No.  Nothing’s changed.”  Except me, she wanted to scream.  But instead she met his gaze, willing her courage to hold.   This wasn’t going to be easy.  Travis was part of her.  He’d given her a life.  A home.  Children.  But then maybe she had it wrong.  Maybe she’d given him those things.  Maybe he’d been lucky to have her.

Or maybe they’d been lucky to have each other.  At least in the beginning.

“Then what?” he asked, sounding impatient.  He always sounded impatient these days.  And sadly, Celeste knew why.  And it had nothing to do with their son’s death, his impatience with her, with their life, it had started long before that.  And if Jacob had lived, they’d already have had this conversation.

But her son was dead and Celeste had lost herself in grief.  Only now it was time to push the pain aside and face things head on.  Jacob would want that.  Lacey did want that.  And Payton had done just that.  There were no two ways about it, it was long past time for Celeste to stand on her own two feet.

She swallowed, looking down at the envelope, drawing strength from what she knew it contained.  “I know about Kristin, Travis.”

He dropped the newspaper, the color leeching out of his face, his mouth working as he tried to find words.  “Oh God, Celeste, I’m so sorry.”

She shook her head, holding up her hand to cut him off.  “Save it.  I don’t want to hear it.  There’s nothing you can say that is going to fix this. And you know that as well as I do.”  Her hands were shaking, and she pulled them down to her lap, interlacing her fingers to try and hold onto her control.

“Darling, you’re not well. We don’t need to do this now.”

She pulled in a deep breath, forcing herself to meet his gaze.  “Yes, Travis.  We do.”

He shifted in his chair, clearly uncomfortable.  Travis always liked things neat and tidy.  Everything in its proper place.  It’s why she’d spent practically her entire marriage making sure that everything was always perfect, reasoning that if he was happy, she was happy.

What a load of crap.

“How did you find out?” he asked, still frowning.

“It doesn’t matter.  It just matters that I know.”

“How long then?  How long have you known?  Is that why you’ve been so…so…” he trailed off clearly unwilling to finish the sentence.

“Crazy?  Drunk?  Lost?”  She bit out the words.  “No.  That was because of Jacob.  Because he was important to my life.  I’ve known about Kristin since before he died.  And had the car accident never happened, then maybe this whole thing would have played out differently.  But it didn’t.  And so here we are.  Sitting in our kitchen pretending like there’s something to talk about.”

“But, Celeste,” he protested, “no matter what I’ve done, you have to know that I love you.”

“No, you don’t.”  She shook her head, feeling the tears prick the back of her eyes.  “Maybe you did once upon a time, but not anymore.  Not for a long time.  And while I can’t pretend that it doesn’t hurt, I can at least return the favor.”  She stared at him, some tiny part of her wishing that there were a way to stop this.  To turn back the clock.  To fix whatever it was they’d broken so long ago.  But deep in her heart she knew it wasn’t possible.  That moment, if it had ever existed, was long past.  “Travis, I don’t love you anymore either.”

Silence stretched through the kitchen, memories playing like a movie inside Celeste’s head.  She and Travis laughing as they’d sat down for their first breakfast in the new house.  Holding hands across the table while baby Sara Jane cried and cried.  Jacob running into the room, flushed with pride over a Little League victory.  Lacey, covered in flour, proud of the very first, albeit lop-sided, cake she’d ever baked.  This had been a family kitchen. Still, was a family kitchen.

But whatever connection had existed between the two them—it was now severed beyond hope.

“You don’t mean that.”  He actually looked hurt.  The thought surprised Celeste.

“I do.  You’ve always thought you could have everything your way.  Keep your life compartmentalized so that you could have it all.  But it doesn’t work like that, Travis.  Life is messy and things happen.  And people change.  I don’t know why we let it go.  But we did, and there’s no going back.  And even if there were, I don’t want to.”  She pushed the envelope across the table.  “I had these drawn up a couple weeks before Jacob died.”

Travis took the envelope and open the clasp holding it closed.  He slid out the papers and scanned the contents.  “You’re divorcing me?”   Again she was amazed at his shock.

“Surely you’re not surprised?  I mean, to be honest, if Jacob had lived it’s entirely possible that you’d have beaten me to the draw.  Or were you planning to live your double life forever?”

Excerpt from Blue Skies by Dee Davis, Copyright ©2016 by Dee Davis. All rights reserved. Reprint only with permission from author. Please contact dee@deedavis.com.